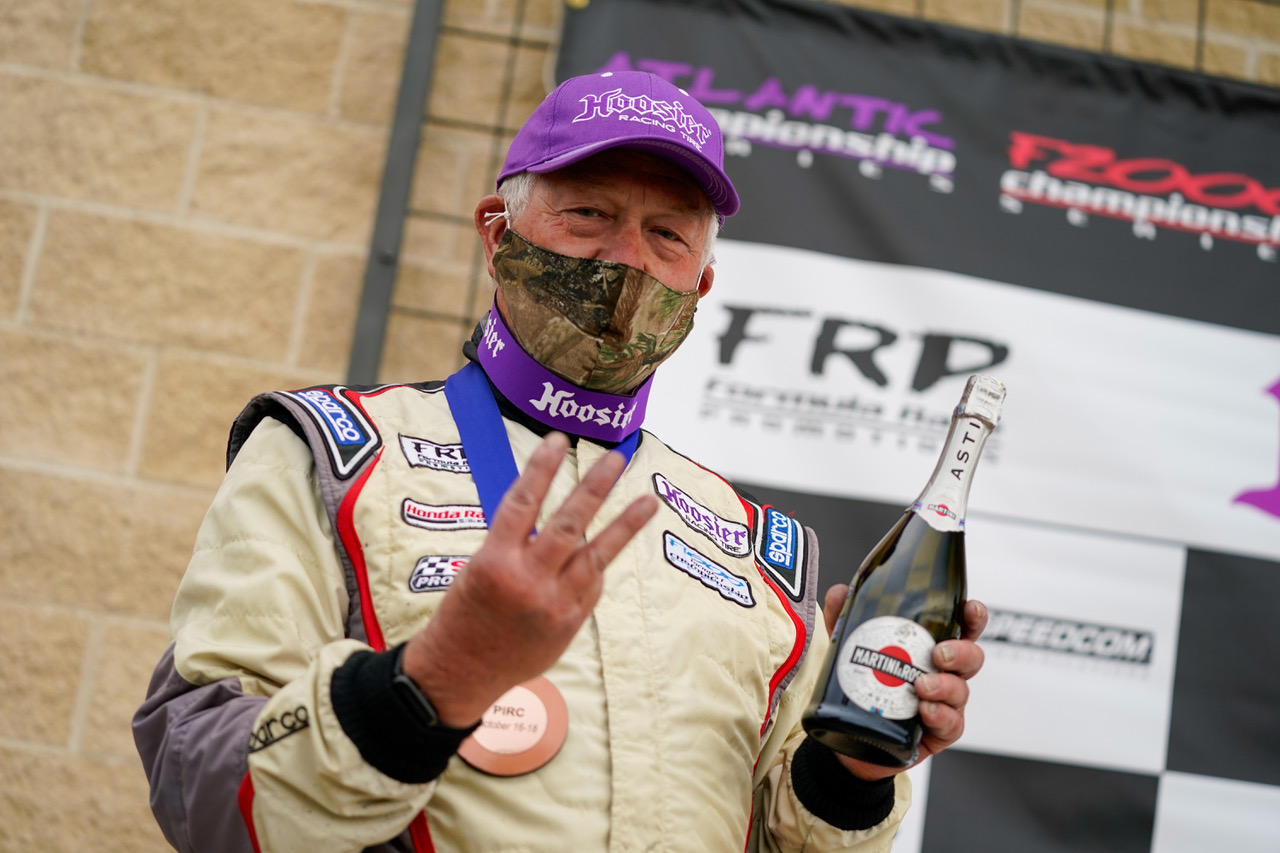 Formula Race Promotions Concludes Penultimate Round of 2020 in Pittsburgh

It was the second trip of the year to the Pittsburgh International Race Complex for teams and competitors in the Formula Race Promotions program as the series completed its penultimate round this past weekend. With a forecast that featured cool temperatures, the racing action heated up on track as nail biting races and more green flag racing than any series in the country proved to be the talking points of the weekend. While new winners emerged this weekend in a couple different divisions, perennial frontrunners also showed their prowess climbing to the top of the results sheets on several occasions. 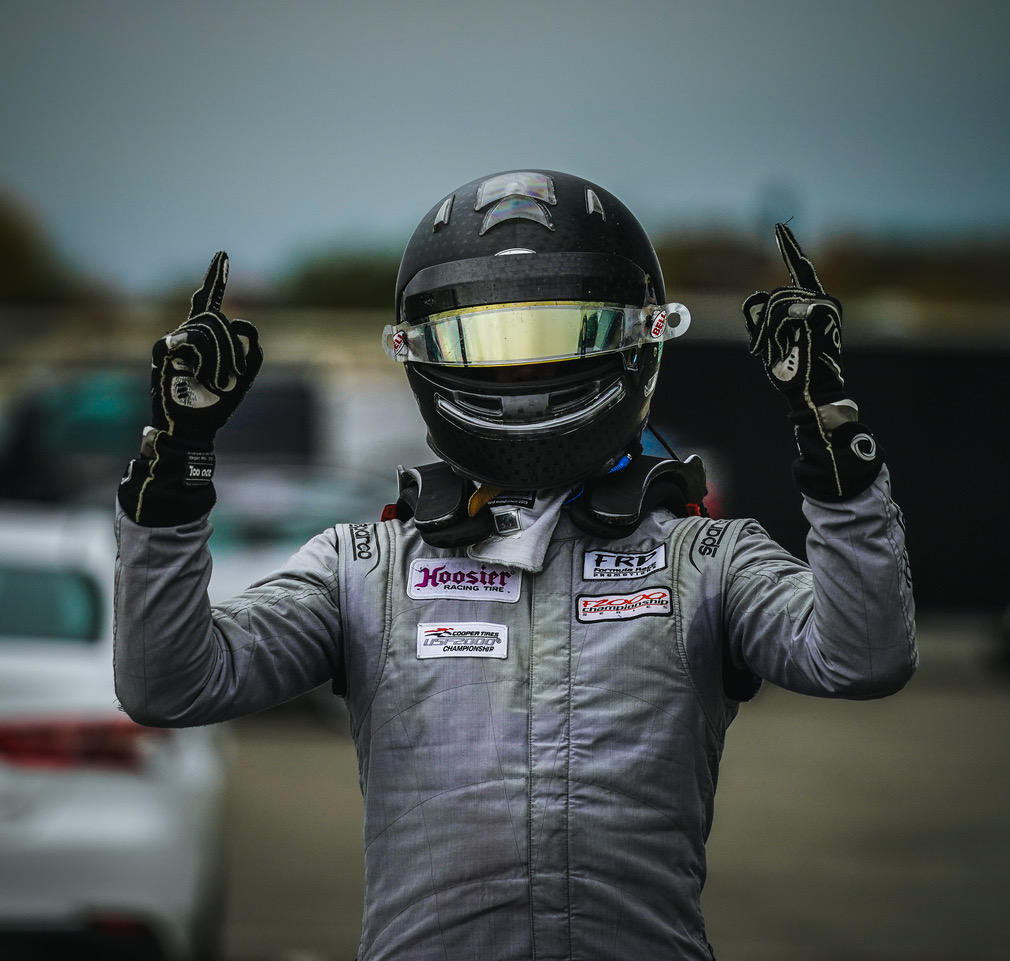 The Team Pelfrey drivers of Max Esterson and Dylan Christie swept the top two spots in F1600 qualifying on Saturday as they would lead the field to green. Esterson shot out to the lead early but was swallowed up by point leader and Rice Race Prep driver Simon Sikes on lap five. Sikes drove on to take the win and extend his championship point lead finishing 1.288 ahead of Dylan Christie. Josh Pierson was back in the F1600 series for Exclusive Autosport and immediately made his presence felt with a podium result in third. 2020 race winner Dexter Czuba crossed the stripe in fourth to add to his point tally on the season while Trey Burke closed his day in fifth.

Dylan Christie leveled up in the second wheel-to-wheel action of the weekend as he and Pierson both gained one position through their thirteen-lap race. Christie scored the win 1.951 ahead of Pierson. Dexter Czuba found his way to the podium in third, narrowly missing the second position by a mere .040. Trey Burke added his second top-five result crossing the line in fourth as Scott Rubenzer finished fifth, securing another victory in F1600 Masters.

Sikes made it a two for three weekend taking top honors in race three as he dominated the final wheel-to-wheel action of the weekend to win by 5.580 over Max Esterson. Esterson finished about the same distance in front of the third-place driver Scott Rubenzer as he made it three-for-three on the weekend in Masters wins. Rob Albani finished fourth on track and the second step of the podium in Masters while Jason Pribyl crossed the line in fifth. In a final race that featured some close and hard racing, perennial frontrunners Dylan Christie and Dexter Czuba were sixth and eleventh after running in the top-five throughout the weekend while Josh Pierson was classified in fifteenth. Some new names in the top-ten included Glen Cordova in seventh, William Velkoff in eighth, Omar Khan in ninth and Mike Scanlan in tenth. Following race three, Max Esterson was disqualified from the final results moving everyone behind him forward one position and confirming the podium with Sikes winning, Rubenzer in second and Albani in third. 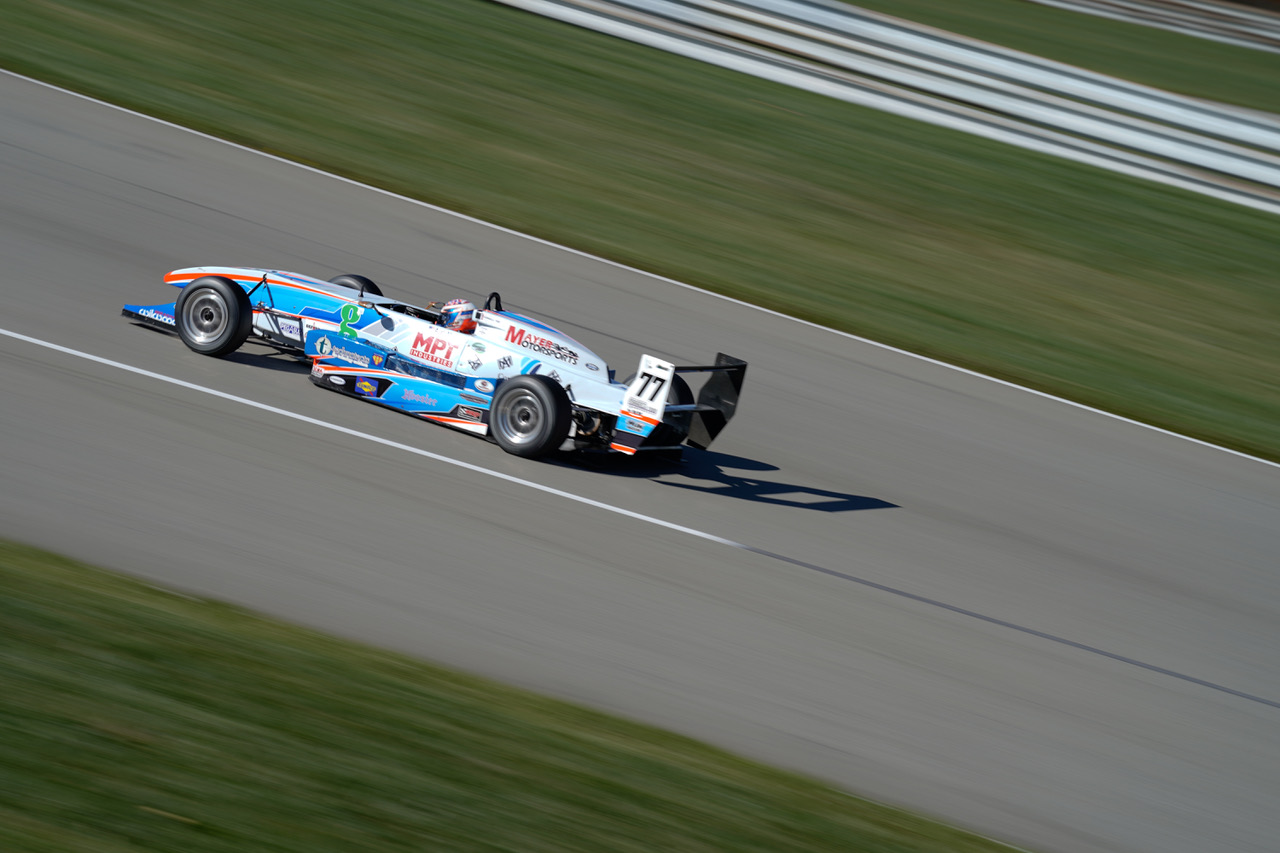 Being the driver to beat in 2020, Alex Mayer did not record a time in qualifying and would be forced to start the first wheel-to-wheel action of the weekend from the tail of the field. Leading the field to green was the #93 entry of Stephen Hamilton as he secured the pole position by .106 over Reilly Harris.

Mayer quickly went on the attack when the green flag flew on Saturday afternoon marching his way forward throughout the fourteen-lap race. Saving his fastest lap for the second to last lap of the race, Mayer moved to the point and added another win to his growing results resume. Harris crossed the line in second, less than half a second in arrears of Mayer with Hamilton standing on the podium in third with Tim Pierce and Rhys Myers in fifth.

The top two drivers in F1000 remained the same from race one to race two on the weekend as Alex Mayer scored a perfect event taking home his second race win in as many days. Reilly Harris added his second podium result of the weekend with another second-place result while Tim Pierce found his way to the podium ending his weekend in third with Myers and Hamilton classified in P4 and P5. 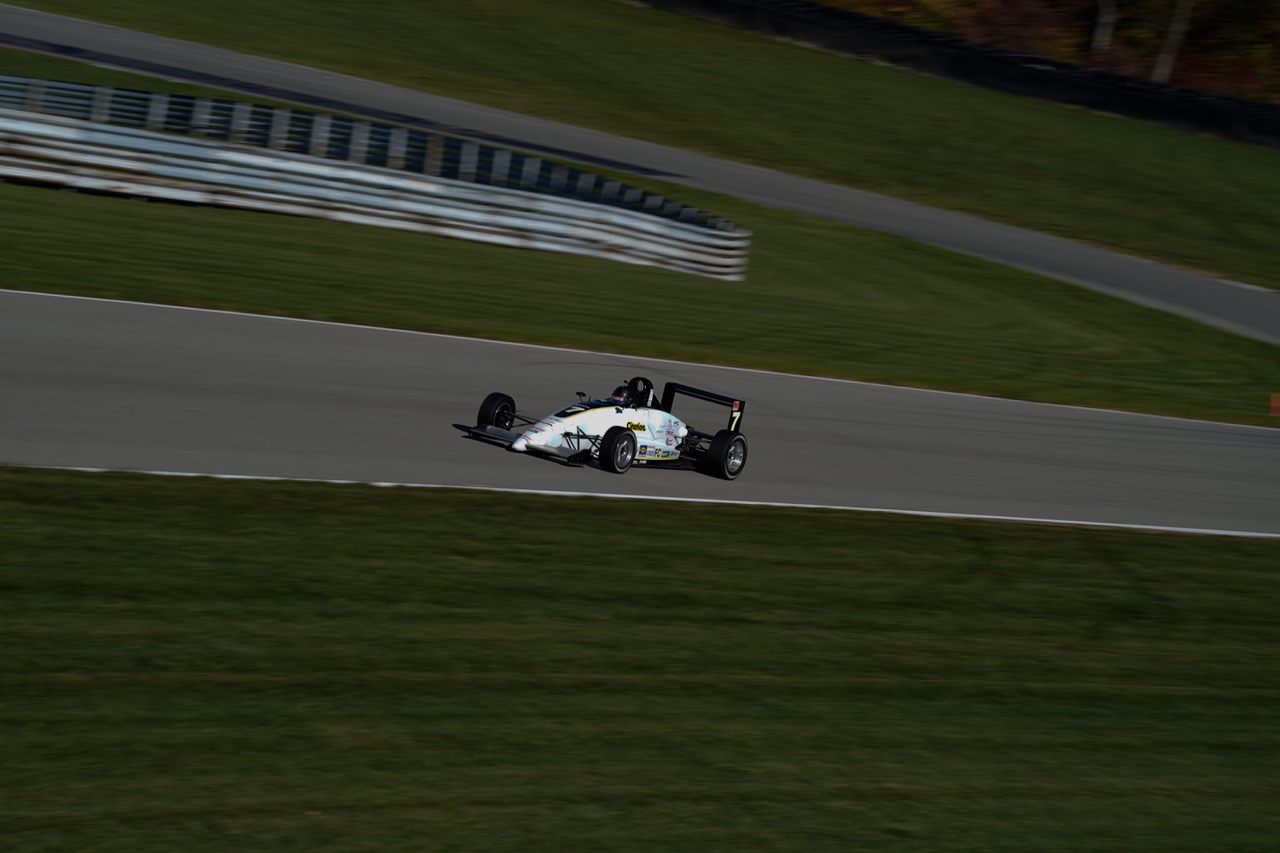 Continuing to sound like a broken record, it was all Brandon Dixon in F2000 with another pole position and win this past Saturday. Pressured in the race by Reeve Everard and Mitch Regadas, Dixon secured another win on the season as he celebrated his winning streak on the podium. Everard was able to nab the second step on the blocks with Mitch Regadas in third. Trent Walko used track knowledge to end his day in fourth while Dave Weitzenhof crossed the line in fifth.

It took the skills of Max Esterson to dethrone Dixon in the F2000 division as hopped into the seat of the #90 machine and drove to a victory on Sunday. Utilizing the F1600 program as a training ground for future advancement and results, Esterson scored a new track record on route to his first career F2000 win and podium. Esterson showed his true skill level to jump into a car with only one session prior to the green flag and went on to steal the show. While Dixon ran second, with two laps remaining he retired from the event opening the door for a non-Dixon podium for the first time in a long time. Esterson topped the blocks ahead of Nick Palacio who garnered a second-place finish after scoring a fourth place result the day before. Mitch Regadas joined Esterson and Palacio on the podium in third as Trent Walko and John Dole were able to finish fourth and fifth respectively. 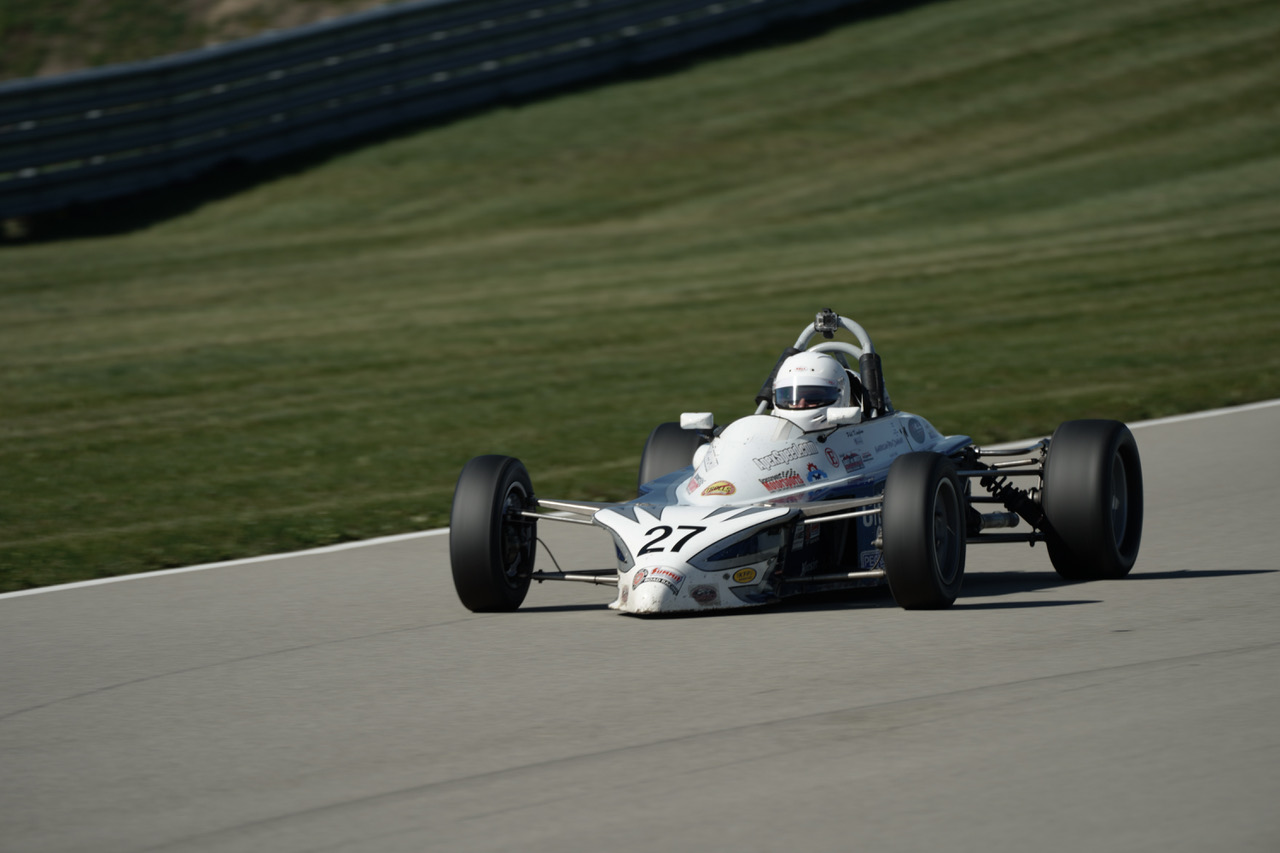 Phil Kingham flexed his muscles in the RCFFS program adding another pole position and race win to his results sheet. Scoring the victory, Kingham was joined on the podium by Michael Rand and Gary Godula in the first race of the weekend. With a strong seventeen car field, Kingham dominated to take the victory by nearly ten seconds over his rivals. Wayne Nicolette and Steve Roux rounded out the top-five and looked to better their performances in the next race.

Kingham made it two-for-two on the weekend with his second RCFFS win, this time by 16.704. Gary Godula was the best of the rest in second while Steve Roux finished less than half a second behind him to stand on the podium in third. Wayne Nicolette and Christopher Horan finished fourth and fifth respectively.

It was the Nicolette and Roux show in the third and final RCFFS race of the weekend with Roux getting the upper hand to score the win. Nicolette was able to secure the second step of the podium as they finished miles ahead of the rest of the field including third-place finisher Greg Horan. Chuck Van Nostrand finished in the fourth position, passing Brian Farrell on the final circuit of the twelve-lap race to take finish the weekend in fourth with Farrell in fifth.

Raymond Carmody scored a .039 victory over Jeffery Filipkowski in the first Formula Vee event of the weekend as the duo was joined on the podium by third place finisher Trevor Carmody. Dean Curtis was the fourth-place finisher but secured the Formula Vee Masters win while Chris Elwell rounded out the top-five.

It was a Carmody on the top step of the podium in race two but a different one from the previous day as Trevor Carmody took the win ahead of Chris Elwell in the Formula Vee category. Tim Sager was classified third overall but the winner in the Masters Class while Ray Qualls closed his day in fourth and Dean Curtis was fifth overall.

Doug Seim scored the pole position in the nine-car strong Formula First program and carried that momentum into wheel-to-wheel action to take the win. As the driver to beat all day, the Seim name was seen on the first two steps of the podium as Doug Seim scored the win ahead of Matt Seim. Greg Podgorski was the best of the rest in P3 while Trevor Carmody added his second top-five finish of the day in fourth as James Monaghan rounded out the top-five.

The top-five from race one remained static in race two as Doug Seim took home his second win of the weekend while George Podgorski and Matt Seim were second and third. Trevor Carmody added to his weekend results with a fourth-place finish for the second day in a row while James Monaghan crossed the line in fifth.

With only one weekend off in between events, the Formula Race Promotions program will travel to Road Atlanta in Braselton, Georgia for the final round in their 2020 season on October 30th and 31st.

Please remember that all series news, information, results, photos and PR will be communicated through our social media pages listed below. Please be sure to tag FRP in any and all posts to help us have the ability to promote you.

For questions, comments or concerns, please feel free to reach out to Bob Wright RobertW@RaceFRP.com or Clay Hutchinson ClayH@RaceFRP.com. For media inquiries, please contact us via email to Media@RaceFRP.com